Future Leaders Story on Me in the Suburban 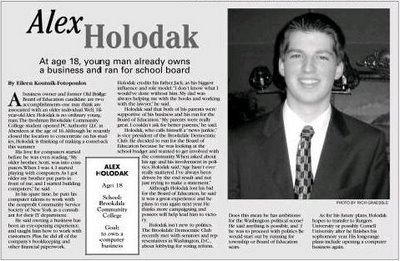 At age 18, young man already owns a business and ran for school board

A business owner and former Old Bridge Board of Education candidate are two accomplishments one may think are associated with an older individual.Well, 18-year-old Alex Holodak is no ordinary young man.

The freshman Brookdale Community College student opened PC Authority LLC in Aberdeen at the age of 16.Although he recently closed the location to concentrate on his studies, Holodak is thinking of making a comeback this summer.

His love for computers started before he was even reading.“My older brother, Scott, was into com-puters.When I was 4, I started playing with computers.As I got older my brother put parts in front of me, and I started building computers,”he said.

In his spare time, he puts his computer talents to work with the nonprofit Community Service Society of New York as a consultant for their IT department.

He said owning a business has been an eye-opening experience, and taught him how to work with customers. Plus, he did all of the company’s bookkeeping and other financial paperwork.

Holodak credits his father, Jack, as his biggest influence and role model.“I don’t know what I would’ve done without him. My dad was always helping me with the books and working with the lawyer,”he said.

Holodak said that both of his parents were supportive of his business and his run for the Board of Education.“My parents were really great. I couldn’t ask for better parents,”he said.
Holodak, who calls himself a “news junkie,” is vice president of the Brookdale Democratic Club. He decided to run for the Board of Education because he was looking at the school budget and wanted to get involved with the community.

When asked about his age and his involvement in politics, Holodak said,“Age hasn’t ever really mattered. I’ve always been driven by the end result and not just trying to make a statement.” Although Holodak lost his bid for the Board of Education, he said it was a great experience and he plans to run again next year. He thinks more campaigning and posters will help lead him to victory.

Holodak isn’t new to politics. The Brookdale Democratic Club recently met with senators and representatives in Washington, D.C., about lobbying for voting reform.

Does this mean he has ambitions for the Washington political scene? He said anything is possible, and if he was to proceed with politics he would start out by running for township or Board of Education seats.

As for his future plans, Holodak hopes to transfer to Rutgers University or possibly Cornell University after he finishes his sophomore year. His long-range plans include opening a computer business again.