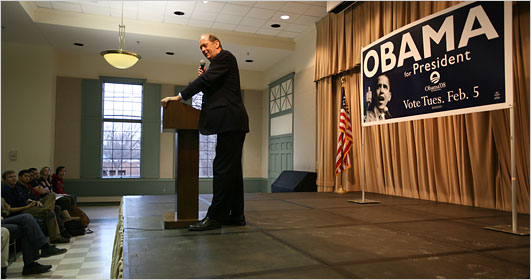 Bill Bradley and the ‘Obama Generation’

NEW BRUNSWICK, N.J. — Though most of the more than 100 students at a Barack Obama rally at Rutgers University on Thursday afternoon were not yet teenagers when the event’s keynote speaker, Bill Bradley, was a presidential candidate, they still gave the former senator two standing ovations.

In between the applause, Mr. Bradley dared to give the students’ generation a sobriquet. “Just as there are people my age who call themselves the Kennedy generation,” he predicted, “you’ll call yourself the Obama generation.”

Mr. Bradley, who endorsed Mr. Obama a month ago, said after the event that he would speak at Bergen Community College on Friday and then, “wherever they ask me.”

By “they,” he means the Obama campaign, which on Wednesday afternoon contacted Naomi Michaelis, 19, the New Jersey director of Students for Barack Obama. They informed her that she had 24 hours to coordinate an event featuring Mr. Bradley, Representative Steve Rothman and Mayor Jun H. Choi of Edison. Though daunted by the challenge, Ms. Michaelis threw herself into the work of scheduling a room, sending out invitations and making signs because she felt that Mr. Bradley’s visit represented her burgeoning political career coming full circle. In 2000, when she was 11, her mother took her to Mr. Bradley’s presidential campaign office in West Orange.

“That was the first campaign I really cared about,” she said. “So it’s really cool to have him here.”

Mr. Bradley wore a navy blue pinstriped suit with a green and navy striped tie. Underneath layers of winter clothes one student wore a Barack Obama “Got Hope?” T-shirt. Others wore shirts advertising Rutgers and campus fraternities, and one student wore a T-shirt emblazoned with the logo for the 1980s punk rockers Bad Religion.

Many students at the rally said they knew Mr. Bradley by reputation only, but came out because of their enthusiasm for Mr. Obama’s campaign.

“I got the e-mail about this rally last night,” said Martha Guarnieri, 19. “I came because of Barack Obama.”

While Ms. Guarnieri was one of dozens of students who planned to vote for Mr. Obama in Tuesday’s primary, others were undecided.

Though she held aloft a hand-painted sign reading “Fired Up And Ready to Go: Obama,” Charlotte Burkly, 22, said she wasn’t sure who to support in Tuesday’s primary in New Jersey.

“Maybe this will persuade me,” she said before the event.

Mr. Bradley said that Mr. Obama is the only candidate who will “put his country before his party” by uniting the Republican ethos of “individual responsibility” with the Democratic ethos of “collective caring.” He named affordable health care and college tuition, higher salaries for public school teachers and higher fuel efficiency standards for cars as issues where Mr. Obama’s leadership would be best for America.

Without naming any other candidates, Mr. Bradley criticized those who voted for the Iraq war and then tried to “razzle-dazzle explain it so you can try to have it both ways,” perhaps a thinly veiled swipe at Senator Hillary Rodham Clinton. After the event Mr. Bradley told an audience member that he was disappointed in what he perceived as negative campaigning by former President Bill Clinton.

Among those who rose to their feet before and after Mr. Bradley spoke was Chris Howell, 34, a London resident who scheduled a two-week visit to New Jersey to volunteer for Mr. Obama’s campaign. Barred from voting and contributing money, he said he has spent hundreds of dollars on Barack Obama T-shirts and art supplies to make campaign signs. He said it is crucial for his country that Mr. Obama be elected president.

After Mr. Bradley’s speech Alex Holodak, 20, shook hands and had his photo taken with the former senator from New Jersey and basketball star, whom the political science and public policy major called “a great inspiration to me.”

After the flash the photographer exclaimed, “This is going up on your Facebook site,” as Mr. Holodak beamed.

Mr. Bradley looked amused. That’s one difference between the Kennedy and Obama generations.

← On Barack Obama’s Homepage
RU Dems and I Interviewed on Fox News during Super Tuesday! →